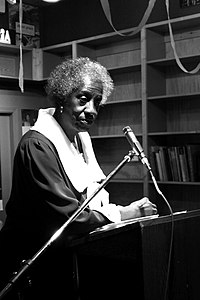 Unita Zelma Blackwell (née Brown; March 18, 1933 – May 13, 2019) was an American civil rights activist and politician. She was the first African American woman, and the tenth African American, to be elected mayor in the U.S. state of Mississippi. She served as mayor of Mayersville, Mississippi from 1976 to 2001. She was a project director for the Student Nonviolent Coordinating Committee (SNCC). She was also a founder of the US–China Peoples Friendship Association. Her autobiography, Barefootin', was published in 2006.