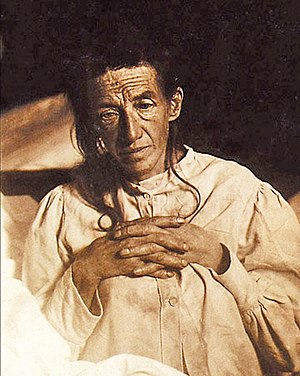 Dementia is a group of diseases with symptoms, which affect the way people think and interact with each other. It can often be linked to a disease or damage done to the brain. Very often, short-time memory, mind, speech and motor skills are affected. Certain forms of dementia cause a change in the personality of the sufferer. A person suffering from dementia will lose certain skills and knowledge they already had. This is the main difference to other conditions affecting the mind. People who suffer from learning problems, or lower intelligence will never acquire certain skills, people suffering from dementia will lose skills they have acquired. Dementia is more common in older people, but younger people can be affected as well. Certain forms of dementia can be treated, to some extent. The most common form of dementia is Alzheimer's disease, which accounts for between 50 and 60 percent of all cases. Other types include vascular dementia and lewy body dementia.

Famous people who suffered from dementia include Augusto Pinochet, the Chilean leader, and also Rosa Parks, the civil rights activist.

People who see the following worsen may suffer from dementia:[1]

Behavioral changes may include:

Reversible causes of dementia also include diffuse axonal injury after injuries to the head or the brain, known medically as Traumatic brain injury.

Creutzfeldt-Jakob disease causes a dementia that gets worse quickly, over weeks or months, and is caused by prions.[2] ,other forms like encephalopathy or delirium may develop relatively slowly, over a number of years.

The two leading causes of dementia are Alzheimer's disease and Multi-infarct disease.[3] Glioma related tumors are another kmown cause. Alcohol dementia, is sometimes associated with Wernicke-Korsakoff syndrome, and is caused by long-term or uncontrolled, heavy alcohol abuse.

Possible metabolic causes are such as liver failure or kidney failure; and chronic subdural hematoma. Possible other causes may include brain infection by illnesses like meningitis leading in cases to viral encephalitis drug toxicity (e.g. anticonvulsant drugs). A recent report by Science Daily says that researchers at the University of Bergen, in Norway have discovered a connection between Oral health and Alzheimers disease.[4]