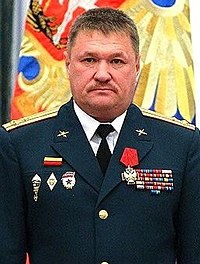 Valery Grigorievich Asapov (Russian: Валерий Григорьевич Асапов; 1 January 1966 – 23 September 2017) was a Russian lieutenant general in the Russian military. Asapov has been described as one of the senior Russian military advisers in Syria.[1] Asapov, then commander of an army motorised rifle brigade, was awarded the 4th Class of the Order "For Merit to the Fatherland" by President Vladimir Putin on 23 February 2013.[2]

Asapov was killed by mortar fire from ISIL militants near the city of Deir ez-Zor during the Syrian Civil War, according to the Russian Defence Ministry.[3] He was 51 years old.