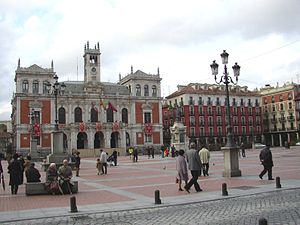 Valladolid (info • help) is a city in Spain, with a population of 316,564. It is the capital of Castile and León, and one of the historical capitals of the Spanish Kingdom.

On October 19 1469, Ferdinand II of Aragon and Isabella I of Castile married secretely in the Palacio de los Vivero. Also, Christopher Columbus died in the city on May 20, 1506.

The river which runs through the city is known as the Pisuerga.