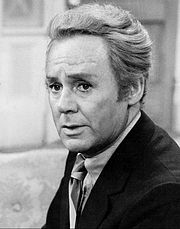 Van Johnson (Charles Van Dell Johnson, August 25, 1916 – December 12, 2008) was an American movie, television, stage, radio, voice actor, singer, and dancer who is known for his roles in 30 Seconds over Tokyo, A Guy Named Joe and in The Caine Mutiny.

Help Improve This Page: Please contact us to become an approved KidzSearch editor and provide your credentials. Provide feedback on this article in our Van Johnson Forum[[Category:Actors from Rhode Island