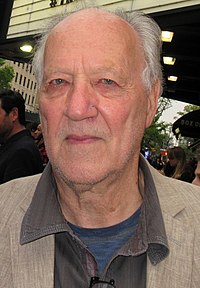 Films written, not directed, by Herzog:

Herzog has written all his films, except these which he co-wrote: