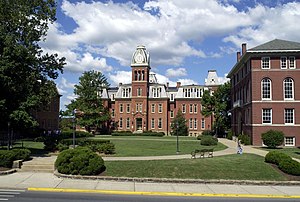 The Woodburn Hall which is one of the oldest building on campus.