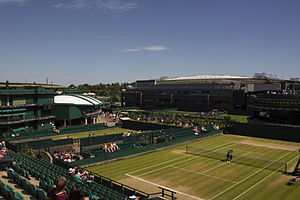 The All England Lawn Tennis Club

Wimbledon is a suburb in the London Borough of Merton, in the south west of London, England. The Wimbledon Championships, a tennis competition, is held there every summer. Also in Wimbledon are New Wimbledon Theatre, and Wimbledon Common, one of the largest areas of common land in London.[1] Wimbledon F.C., a famous football club, started in Wimbledon, then moved to Milton Keynes and changed their name to Milton Keynes Dons F.C. however after this move AFC Wimbledon was created and now plays at Kings medow in Kingston. People live in two different areas. The High Street area is called the "village", and the area near the railway station is called the "town". The High Street area is part of the original Middle Ages village, and the "town" area is modern - houses were first built there in 1838.

People are known to have lived in Wimbledon since the Iron Age when the hill fort on Wimbledon Common was built. At the time the Domesday Book was written (about 1087), Wimbledon belonged to the lord of the manor of Mortlake.[2] The ownership of the manor of Wimbledon changed between various rich families many times during its history, and the area also attracted other wealthy families who built large houses such as Eagle House, Wimbledon House and Warren House. The people in the village were either poor people who worked on the land or they were rich and important people. The rich and poor people lived together happily. In the 18th century the Dog and Fox public house became a stop on the stagecoach run from London to Portsmouth, then in 1838 the London and South Western Railway (L&SWR) opened a station to the south east of the village at the bottom of Wimbledon hill. After the station was built, new houses were built near to it, and many people began living near the station. In the second half of the 19th century the number of people living in Wimbledon grew quickly. At the start of the 19th century there were about 1,000 people living in Wimbledon; then in 1911 there were about 55,000 people.[3] During this time large numbers of villas and terraced houses were built out along the roads from the centre towards neighbouring Putney, Merton Park and Raynes Park.

Wimbledon lies in the south west area of London, south of Wandsworth, and east of Kingston upon Thames on the outskirts of Greater London. It is 7 miles (11.3 km) south-west of the centre of London at Charing Cross. It is considered an rich suburb with a mix of grand Victorian houses, modern housing and low rise apartments.[4] The residential area is split into two sections known as the village and the town,[5] with the village around the High Street being part of the original medieval village,[6] and now a prime residential area of London commanding high prices,[4] and the "town" being part of the modern development since the building of the railway station in 1838.

The area is identified in the London Plan as one of 35 major centres in Greater London.[7]

The population consists around 57,000 adults, the majority in the ABC1 social group.[8] The population grew from around 1,000 at the start of the 19th century to around 55,000 in 1911, a figure which has remained reasonably stable since.[3]

Originally Wimbledon had its own borough of Wimbledon and was within the county of Surrey; it was absorbed into the London Borough of Merton as part of the creation of Greater London in 1965. It is in the Parliamentary constituency of Wimbledon, and since 2005 it has been represented by Conservative MP Stephen Hammond.[9]

The club played in the English Football League and won the FA Cup in 1988. It was a professional football club, which means that the players get paid to play.