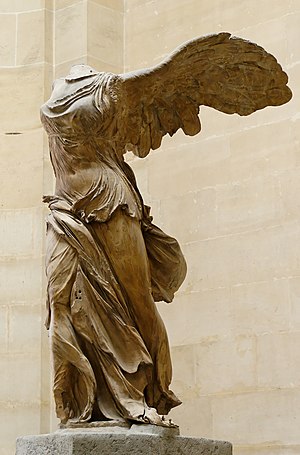 The Winged Victory of Samothrace

The Winged Victory of Samothrace (or Nike of Samothrace) is a Parian marble sculpture now in the Louvre, Paris, France. It is believed to have been made about 190 BC. It was discovered in 1863. It commemorates Nike, the Greek victory in a sea battle near Samothrace. It stands 2.44 m high. The work presents a pose where violent motion and sudden stillness meet. It is notable for its graceful balance and for the rendering of the figure's draped garments, depicted as if rippling in a strong sea breeze.