Won't You Be My Neighbor? (movie) 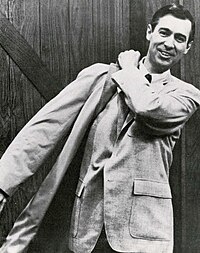 The subject of the movie is Fred Rogers

Won't You Be My Neighbor? is a 2018 documentary movie directed by Morgan Neville. It is about the life and philosophy of Fred Rogers, the host and creator of Mister Rogers' Neighborhood. The trailer was released on what would have been Rogers' 90th birthday, March 20, 2018.[1][2]

The movie premiered at the 2018 Sundance Film Festival and was released on June 8, 2018. The movie received very good reviews and has a 99% rating on Rotten Tomatoes.[3]

It has made $22 million in the box office making it the highest grossing biographical-documentary of all time.[4]

It was nominated for numerous awards, won the Independent Spirit Award for Best Documentary Feature, and was chosen by Time magazine as one of its top ten films of 2018.[5]

In November 2018, Morgan revealed that the original title of the movie was The Radical Mister Rogers, but after the election of Donald Trump, the term "radical" had a negative connotation according to Morgan.[6]

PBS aired the movie on February 9, 2019, as part of the network's Independent Lens series.[7]