For the storage device, see Write Once Read Many 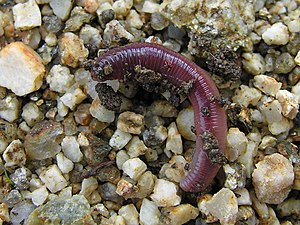 An earthworm is an invertebrate animal with a long, stretchy body and no legs. It is a type of annelid.

There are thousands [5,500] of known species of worms. They can be found everywhere, except in polar or dry climates. Their size varies: they can be between two centimeters and about three meters in length. The biggest known earthworm is the Giant Gippsland Earthworm, one of about 1 000 earthworm species found in Australia. They are usually about 80cm in length, but can grow to about 3 meters. Some other worms are Tapeworm and roundworm. Both of those worms are parasites.

The most common earthworm (in Europe, and most other temperate climate regions) can grow to a size of about 20-25 cm when extended.

Most earthworms can regrow lost segments. This capability varies by species though.

Long ago, all animals looking like worms were lumped together by John Ray, and by Linnaeus in their classifications. Later, biologists found that some were in quite different groups. Roundworms and flatworms are different phyla. Inchworms are a type of caterpillar, and the slow-worm is a legless lizard.

Physical characteristics of an earthworm

Despite the fact that worms are both male and female they still need a partner to reproduce. The egg is then laid. When the egg hatches the worms inside will come out and grow until they can mate which takes about 6 weeks.

Earthworms eat soil and rocks. The rocks they eat are tiny and earthworms crush and grind them with their guts. They eat oatmeal. Earthworms eat roots. Earthworms eat compost and also dead plants. An earthworm has enemies like hedgehogs, birds(such as cardinals), and snakes. Their defenses are camouflaging. Camouflage means you cannot see it because it is the same colour (or shade) as its background.