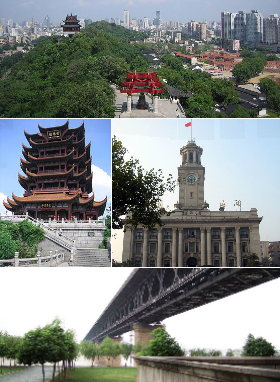 Wuhan (Chinese: 武汉) is the capital of Hubei province, People's Republic of China, and is the city with most people in Central China.[1] It is at the east of the Jianghan Plain, where the Yangtze and Han rivers meet. Joining three nearby cities, Wuchang, Hankou, and Hanyang, Wuhan is a center of transportation, with many railways, roads and expressways passing through. Because of its important role in transportation, Wuhan was sometimes called the "Chicago of China."[2][3] It is also recognized as the political, economic, financial, cultural, and educational center of central China.[1]

In December 2019, the COVID-19 pandemic started in Wuhan.