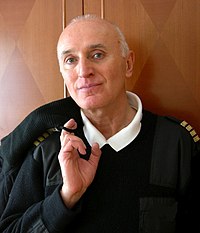 Zoran Modli (Serbian Cyrillic: Зоран Модли; 22 April 1948 – 23 February 2020) was a Serbian journalist, radio disc jockey and aviator. He was one of the most popular Yugoslav radio personalities. Beginning in the early 1980s, he hosted Ventilator 202. He also hosted Modulacije, in the 1990s, and ZAIR starting in 2000.

Modli was a professional pilot for over 30 years. He spent the first 20 years in the state-owned Jat Airways, piloting a Boeing 727, and then moved to a private airlines company Prince Aviation. On 15 July 2010, Modli survived a landing accident at Brač Airport in Bol, Croatia. He was piloting a Cessna Citation II, when the plane ran off the runway and caught fire. All the passengers survived without injuries, but Modli left his job.