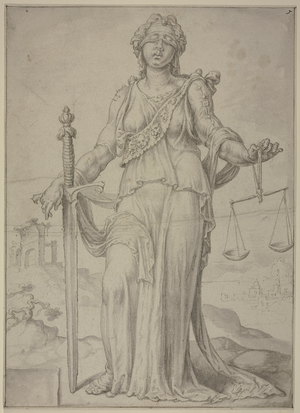 ‘’Justitia’’ by Maarten van Heemskerk, 1556. ‘’Justitia’’carries symbolic items such as: a sword, Weighing scale and a blindfold[1]

Justice is a concept on ethics and law that means that people behave in a way that is fair, equal and balanced for everyone.

Governments, and especially the police and courts, see that the laws are obeyed in most societies. Because they can punish a person for not obeying the law, most people agree that laws should be fair and the same for everyone. But governments sometimes make laws that many people believe are not just. If many people believe this, people may lose respect for the law and may even disobey it. However, in democratic societies, the law itself has ways to change or get rid of these unjust laws.