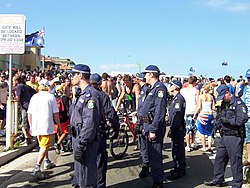 Police watching the crowds before the riots

The 2005 Cronulla riots were a series of violent events between Lebanese and white Australian mobs. Riots started in and around Cronulla, a suburb on the beach in Sydney, Australia's biggest city. The violence was soon also in other suburbs around Sydney. The riots happened on 11, 12 and 14 December. Many people committed crimes there.

Several people were sent to prison for being involved in the riot.[1]