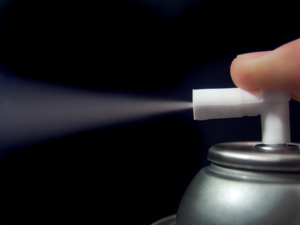 An aerosol can disassembled

Around 1790, it was discovered that a carbonated beverage was pushed out of a container in France.

In 1943, Americans Lyle Goodhugh and William Sullivan, commissioned by the US government, developed a bug bomb (World War II was going on, and it was necessary to find a way to quickly spray insecticide in order to control insect-borne diseases). This date is considered to be the beginning of the mass production of aerosol balloons.

In 1947, aerosolized insecticides appeared on the mass market.

In 1949, Robert Abplanalp invented the modern spray valve. In the same year, Edward Seymour started the production of spray paint.

The instructions for most aerosols warn that it is forbidden to spray it near open flames, electric stoves, and so on.