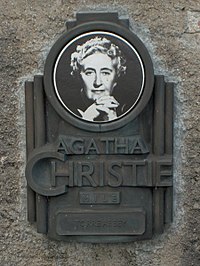 a plaque with a picture of Agatha Christie

Dame Agatha Mary Clarissa Christie DBE (15 September 1890 – 12 January 1976) was an English writer of crime stories. Her books are very famous all over the world, and she sold more than 4 billion books around the world. Only William Shakespeare has sold more books. Also, her books are written in more languages than any other writer's books. People can read them in 103 different languages. Her stories are about murders and finding out who did them. It is hard to find that person. There is a detective who tries to catch the bad person. People like reading her books because they can try to find the answer, too. Reading these books is like playing a game. The most well-known characters in her books are Miss Marple and Hercule Poirot. Miss Marple is an old English lady, and she talks to everyone. People do not think she is smart, but she always finds the bad person. She uses logic to find out who is guilty of the murder. Hercule Poirot is a strange man, a private detective from Belgium who lives in London. He likes to find out who did the murder by thinking about all the evidence. The stories of Poirot and Miss Marple were made into many TV shows and movies.

Christie also wrote plays. One of them is called The Mousetrap, and it started over 60 years ago. It remains the world's longest-running play.

Christie was born in Torquay in Devon, England. She did not go to school. She had lessons from her mother at home. Her mother thought children should not learn to read until they were eight years old. But Christie learned how to read by herself when she was four. She read many books, so she learned to become a good writer. She later became a very good pianist and singer, too. She was married twice; she had a daughter called Rosalind Hicks. She worked in a hospital and in a pharmacy during World War I. She also wrote romance novels and plays. They were very successful too. In 1971, she was honoured by the Queen with the title Dame Commander of the Order of the British Empire.[1]

Christie died on 12 January 1976 at age 85 from natural causes at her Winterbrook House in the north of Cholsey parish, adjoining Wallingford in Oxfordshire (formerly part of Berkshire). She is buried in the nearby churchyard of St Mary's, Cholsey.