Aladdin is a 1992 American animated musical fantasy movie. It was produced by Walt Disney Feature Animation and released by Walt Disney Pictures. Aladdin is the 31st animated movie in the Walt Disney Animated Classics series. It was part of the Disney movie era known as the Disney Renaissance. The movie was directed by John Musker and Ron Clements. It is based on the Arab folktale of Aladdin and the magic lamp from One Thousand and One Nights. The voice cast features Scott Weinger, Jonathan Freeman, Robin Williams, Linda Larkin, Frank Welker, Gilbert Gottfried, and Douglas Seale.

Aladdin was released on November 25, 1992. It got positive reviews and was the most successful movie of 1992, earning over $217 million in revenue in the United States, and over $504 million worldwide. The movie also won many awards, most of them for its soundtrack. Some people have accused it of being racist, because the heroes are light-skinned and have American accents while the villains are dark-skinned and have Arab accents. Aladdin's success led to other material inspired by the movie, including two direct-to-video sequels, The Return of Jafar and Aladdin and the King of Thieves; an animated television series; toys, video games, spin-offs, and Disney merchandise. A Broadway adaptation debuted in 2014. 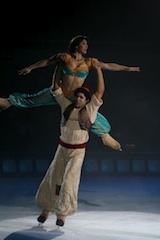 In the city of Agrabah, the Sultan wants his daughter Princess Jasmine to marry a prince, but she rejects every suitor and temporarily leaves the palace. At the marketplace, she meets a "street rat" named Aladdin.

Jafar, the Sultan's vizier, discovers that Aladdin is the only one who can enter the Cave of Wonders and find a magic lamp. Jafar orders him to get the lamp. Aladdin and his pet monkey, Abu, enter the cave, where they befriend a magic carpet and obtian the lamp. Abu inadvertently grabs a forbidden treasure and the cave collapses itself. After surviving, Aladdin rubs the lamp and meets the Genie, who grants three wishes for him. Aladdin uses the first one to disguise himself as a prince. He returns to the city, and meets the Sultan and Jafar. After Jasmine deduces the identity from Aladdin, the Sultan decides to promote him. When Jafar steals the lamp, he uses two wishes and banishes Aladdin from the city. However, Aladdin returns to the palace and tricks Jafar into having the third wish, which makes Jafar being transformed into a genie. Aladdin uses the dark lamp to trap Jafar inside of it.

With the palace reverted to normal, Aladdin uses the third wish to free the Genie and he sets off to see the world. Aladdin and Jasmine plan their marriage.