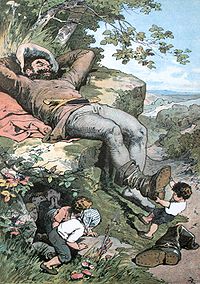 1865 picture of Tom Thumb and the Giant

A fairy tale is an English language expression for a kind of short story. It has the same meaning as the French expression conte de fée or Conte merveilleux, the German word Märchen, the Italian fiaba, the Polish baśń, the Russian сказка or the Swedish saga. These stories are not all directly about fairies,[1] but they are different from legends and traditions (which usually say that the stories are true)[2] and directly moral stories. There are usually fairies, goblins, elves, trolls, giants or gnomes in fairy tales, and usually magic.

Where demons and witches are seen as real, fairy tales can sometimes be similar to legends, where the story is claimed to be historically true. However, differently from legends and epics, they usually do not specifically mention religion and actual places, people, and events. They also do not say exactly when it happened. Instead, they say that the story happened "once upon a time".[4]

Fairy tales are found in oral form (passed on from mouth to mouth) and in literary form (written down). Fairy tales' histories are hard to find. This is because only written fairy tales can be passed on for a long time. Still, literary works show that there have been fairy tales for thousands of years. Many fairy tales today have are based on very old stories that have appeared, though in different ways, in many different cultures around the world.[5] Fairy tales, and works based on from fairy tales, are still written today.

People do not agree what a fairy tale exactly is.[6] Some argue that a story with fairies or other magical beings in the story would make it a fairy tale. However, others have suggested that the expression began when the French expression conte de fées was being translated (it was first used by Madame D'Aulnoy in 1697).[7] Vladimir Propp criticized the difference between "fairy tales" and "animal tales" in his book Morphology of the Folktale.[8] He said that many stories had both fantastic qualities and animals.[8] He suggested that fairy tales could be recognized by their story, but this has been criticized, because the same stories can be found in stories that are not fairy tales.[9]

In fact, people such as Stith Thompson point out that there are often more talking animals and magic in fairy tales than fairies.[10] However, just because there is a talking animal in a story does not mean that the story is a fairy tale.[11]

Steven Swann Jones said that fairy tales were different from other sorts of folktales because of magic.[12] Davidson and Chaudri say that "transformation (changing)" is the most important part of a fairy tale.[13]

Some like to use the German expression Märchen or "wonder tale"[13] instead of fairy tale. For example, in his 1977 edition of The Folktale, Thompson said that fairy tales were "a tale of some length involving a succession of motifs or episodes. It moves in an unreal world without definite locality or definite creatures and is filled with the marvelous. In this never-never land, humble heroes kill adversaries (enemies), succeed to kingdoms and marry princesses."[14] The characters and motifs of fairy tales are simple: princesses and girls taking care of geese; youngest sons and brave princes; ogres, giants, dragons, and trolls; wicked stepmothers and false heroes; fairy godmothers and other magic helpers, often talking horses, or foxes, or birds; rules, and people breaking rules.[15]

Fairy tales were passed down by speaking of it from person to person before writing was developed. Stories were told or acted out dramatically. Because of this, the history of fairy tales is not very clear.[16] The oldest written fairy tales we know are from ancient Egypt, around 1300 BC.[17] There are sometimes fairy tales in written literature in different cultures, such as The Golden Ass, which includes Cupid and Psyche (Roman, 100–200 AD).[18] They show that fairy tales were told from very long ago.