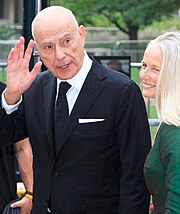 Alan Wolf Arkin (born March 26, 1934) is an American movie, stage, television actor, director, musician, and singer with a career that had last for 55 years. He is mostly known for his Academy Award winning role as Edwin Hoover in Little Miss Sunshine (2006) and for his award-nominated role as Lester Siegel in Argo (2012).

Arkin has also appeared in small-roles or cameo appearances such as in The Muppets (2011). He has won a BAFTA Award, a Golden Globe Award, a Genie Award, a Drama Desk Award, and a Tony Award.

In 2019, he will star in the Disney movie Dumbo as J. Griffin Remington.

Arkin was born in Brooklyn, New York City on March 26, 1934.[1] He was educated at Bennington College and The Second City.