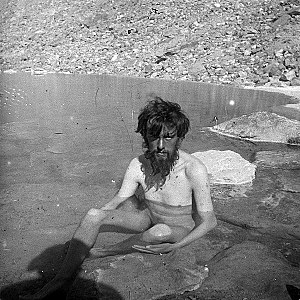 He was an influential member in some occult organizations, such as the Golden Dawn, the A∴A∴, and Ordo Templi Orientis (O.T.O.),[2] and is better known today for his occult books and papers.[3]

Crowley also started a mystical philosophy known as Thelema, the Abbey of Thelema, and revived the term magick.

In 1895, he went to Trinity College, Cambridge after going to Malvern College and Tonbridge School. In his three years at Cambridge, his father died and left him a large sum of money.

In December 1896, Crowley took interest in occultism and by the next year, he began reading books on alchemy and mysticism. A year later, he published his first book of poetry (Aceldama), and left Cambridge, only to meet Julian L. Baker who introduced him to Samuel Mathers and the Hermetic Order of the Golden Dawn.

In November 1899, Crowley bought Boleskine House in Foyers on the shore of Loch Ness in Scotland.

Samuel Mathers, acting leader of the Golden Dawn organization, acted as his early mentor in western magic. Crowley lost faith in his mentor's abilities in 1900 but did not officially break with Mathers until 1904.[5]

Crowley died of a respiratory infection in a Hastings boarding house on 1 December 1947 at the age of 72.[6] He had been addicted to heroin after being prescribed morphine for his asthma and bronchitis many years earlier.[7]

Readings at the cremation service in Brighton included Hymn to Pan, and newspapers referred to the service as a black mass.[6]