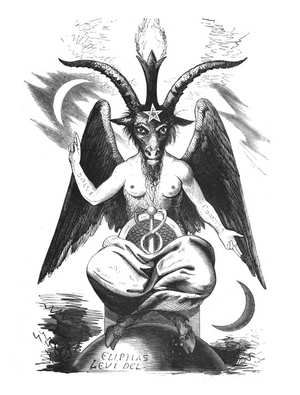 Magician's interpretation of Baphomet.
Occult refers to an area of knowledge or thought that is hidden.[1] The word occult has many uses in the English language. Often it means knowledge that lies outside the range of normal experience or scientific explanation. The term sometimes means knowledge meant only for certain people or knowledge that must be kept hidden. For most occultists it is the study of a deeper spiritual reality.[2]

The term occult is also used as a label given to a number of magical organizations or orders, and the teachings and practices as taught by them. The name also extends to a large body of literature and spiritual philosophy.

Occultism is the study of occult. It can involve such subjects as magic (alternatively spelled and defined as magick), extra-sensory perception, astrology, spiritualism, numerology and lucid dreaming. There is often a strong religious element to these studies and beliefs, and many occultists profess adherence to religions such as Gnosticism, Hermeticism, Satanism, Thelema, and Neopaganism. While Christianity, Judaism, Hinduism, Buddhism, and Islam are generally not considered as occult, some of their modern interpretations can be, such as the interpretation of Hinduism within Theosophy or the various occult interpretations of the Jewish Kabbalah.

Science and the occultism

Alchemy, is considered an occult practice. Alchemy used to be common among scientists, such as Isaac Newton.[3] During the Age of Enlightenment alchemy and science went their separate ways. Newton was accused of introducing occult agencies into natural science when he proposed that gravity was a force capable of acting over vast distances.[4]