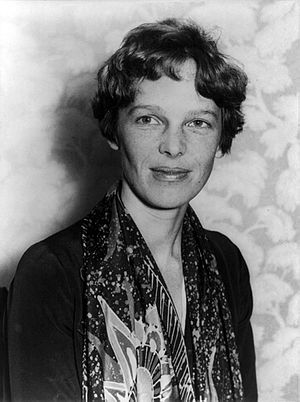 Amelia Mary Earhart (born July 24, 1897 – disappeared July 2, 1937, declared dead January 5, 1939) was an American aviator, one of the first women to fly a plane long distances. She was the first woman to fly a plane by herself across the Atlantic Ocean. She broke many records and showed how air travel had moved forward. She also wrote books, most of them were about her flights. Earhart vanished over the South Pacific Ocean in July 2, 1937 while trying to fly around the world. She was declared dead on July 3, 1937. 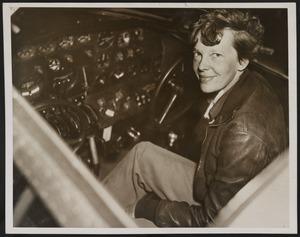 Many theories stand in place about Amelia's end. Some believe she was a spy for the U.S government and was captured by the Japanese on Gardner Island, others say she faked her death. The most plausible though is many researchers believe, which is that the Electra ran out of fuel and that Earhart and Noonan ditched at sea. The "crash and sink" theory is often the most widely accepted explanation of Earhart’s and Noonan’s fate.[1]

However, there is a range of documented, archaeological, and anecdotal evidence supporting the hypothesis that Earhart and Noonan found Gardner Island, uninhabited at the time, landed the Electra on a flat reef near the wreck of a freighter, and sent sporadic radio messages from there. It has been surmised that Earhart and Noonan might have survived on Nikumaroro for several weeks before succumbing.[2][3]