Aviation refers to flying using an aircraft, like an aeroplane. It also includes the activities and industries related to flight, such as air traffic control. The biggest of the many uses of aviation are in air travel and military aircraft. 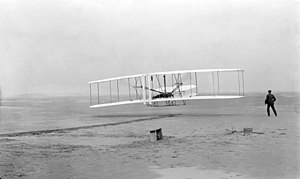 Humans first built devices to fly in the air a long time ago. In the sixth century, Yuan Huangtou from China created a kite. Some primitive types of parachutes and gliders were also created in North Africa.

The modern age of aviation started on November 21, 1783, when the Montgolfier brothers flew in their hot air balloon. Airships followed. On December 17, 1903, the Wright brothers flew the first flight in an aeroplane which was heavier than air; their invention is known as the first aeroplane.[1]