The American Dream is the hope that in the United States of America, anyone can become rich and/or famous if they work hard and try their very best. 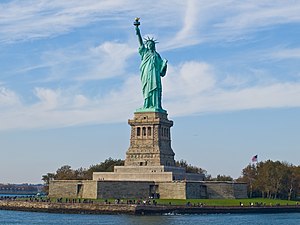 The Statue of Liberty officially named Liberty Enlightening the World, is a monument symbolising the United States. The statue is placed near the entrance to New York City harbor. Many migrants, people who come to America from other countries, come to America because they hope for a better life. America is attractive to migrants, because often there is more freedom to become rich or famous than the country that they leave. The standard icon of the American Dream is the Statue of Liberty.

With American Dream is also meant to live free and equal with all other people in the USA.