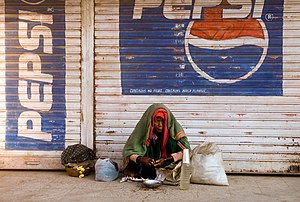 An American Pepsi Cola advertisement is a typical example for Americanisation

Americanisation means that a culture (often a country) is heavily influenced by so-called anglicisms. These anglicisms are American-based. Anglicisms can be institution, values, ways and behaviours, but can also be symbols and pictures.

In Americanisation, the transferring of American culture is only one-way. A culture is being Americanised, but the United States aren't affected by the other culture in return.