The Ananke group is a group of retrograde non-spherical moons of Jupiter that follow similar orbits to Ananke and are thought to have a common origin. 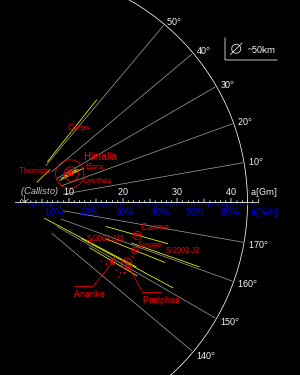 The core members include (from biggest to smallest):[1][2]

The International Astronomical Union (IAU) reserves names ending in -e for all retrograde moons, including this group's members.

The Ananke group is believed to have been formed when an asteroid was captured by Jupiter and broken apart by a collision.

Based on the sizes of the moons, the original asteroid may have been about 28 km in diameter. Since this value is near the approximate diameter of Ananke itself, it is likely the parent body was not heavily disrupted.[3]

Three of the moons of the family (Harpalyke, Praxidike and Iocaste) display similar grey colours while Ananke itself is on the boundary between grey and light red.[4] 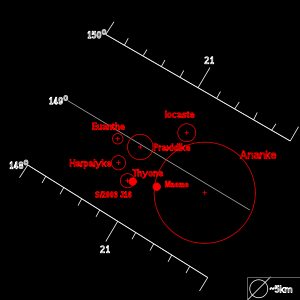 This diagram compares the orbital elements and relative sizes of the core members of the Carme group. The horizontal axis illustrates their average distance from Jupiter, the vertical axis their orbital inclination, and the circles their relative sizes.

This diagram offers a wider field of view than the previous one, showing other small moons clustered near the core Ananke group.