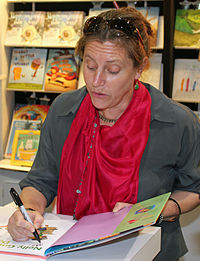 Anna Elizabeth Dewdney (née Luhrmann; December 25, 1965 – September 3, 2016) was an American author and illustrator of children's books. The first book she wrote and illustrated, Llama Llama Red Pajama (2005), was given positive reviews. She also wrote many other books in the Llama Llama series. Her works have been made into stage plays, dance performances, musicals and an animated television series for Netflix.

Dewdney was born in New York City. She spent her early childhood in Englewood, New Jersey. She had two children with her partner, Reed Duncan.