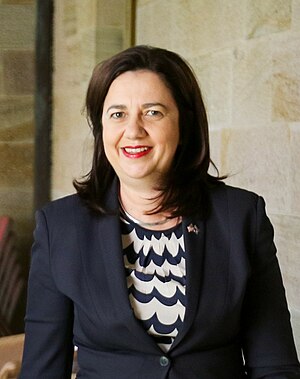 Annastacia Palaszczuk (born 25 July 1969) is a Polish Australian politician. She is the 39th and current Premier of Queensland since February 2015.[1] She is the Leader of the Labor Party in Queensland. She served as a minister in a number of positions in Anna Bligh's government. She is a member of the Parliament of Queensland for Inala since 2006.

Palaszczuk was born in Durack, Brisbane, Queensland. Her father, Henry Palaszczuk, is a veteran Labor MP from Queensland. She has Polish and German ancestry. She is twice divorced.