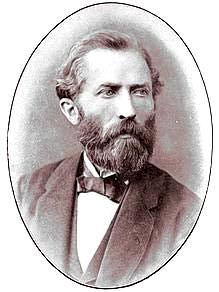 He is considered a founding father of plant pathology (phytopathology) as well as the founder of modern mycology. His extensive and careful studies of the life history of fungi and contribution to the understanding of algae and higher plants were landmarks of biology.[1][2]

De Bary studied the formation of lichens, the association between a fungus and an alga. He traced the stages through which they grew and reproduced and the adaptations which enabled them to survive drought and winter. He coined the word 'symbiosis' in 1879 in his monograph as "the living together of unlike organisms".[3] He carefully studied the morphology of moulds, yeasts, and fungi and he established mycology as an independent science.[4]

de Bary was one of the first people to do research on slime moulds (Myxomycetes). He published a key paper in 1859, and later a book on the subject.[5][6]