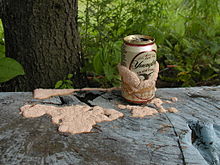 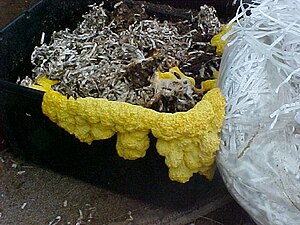 Slime mould growing out of a bin of wet paper 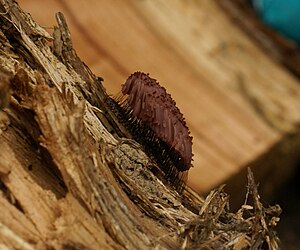 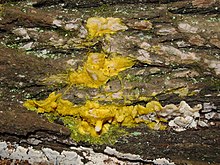 This is the fruiting body of Comatricha nigra. It is not a fungus, but an Amoebozoan slime mould 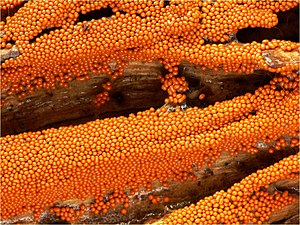 Slime moulds, or slime molds, are forms of life which live on the rainforest floor, and many other parts of the world. They slither over ground and fallen tree trunks in search of food. They scatter spores, like plants, which grow into new slime moulds.

They are a way of life, or life-form, which has evolved a number of times. Because they are not a monophyletic group, they are put into several different phyla. They have some features of fungi and some features of protozoa.[1] This was discussed by Anton de Bary in 1858.[2]

They spend part of their lives as isolated cells, but come together when a chemical signal is released. Then together, they form a multicellular organism which reproduces and makes spores. So they are both single-celled and multicellular. That is not all: the multicellular form loses its cell walls, and becomes a syncytium. This is an organism with many nuclei, but few or no cell walls.

The single cells are amoeboid (amoeba-like) and haploid (one set of chromosomes, like our gametes). The multi-nuclear stage is called a plasmodium. It is diploid, formed from fusions between pairs of amoeboid cells. It gains nutrition by phagocytosing bacteria and food particles.

As the food supply fades, the plasmodium makes haploid cells by meiosis, and they form the basis of spores. The spores are kept and then distributed from a structure like a sporangium. This life-cycle is typical of the main group called Mycetozoa.

Modern molecular biology has shown by sequence analysis that slime moulds are not a monophyletic group. They were once regarded as fungi, but now they are split into three different groups, and none of them are fungi.[3] They are a form taxon, put together because they share some characteristics. Relationships between the groups are not yet understood.

Bikonts are eukaryote cells with two flagellae. There are three groups, which have evolved slime mould form independently.

Fonticula is a cellular slime mould which forms a fruiting body in a volcano shape.[5] Fonticula is not closely related to either the Dictyosteliida or the Acrasidae.[6] A 2009 paper finds it to be related to Nuclearia, which in turn is related to fungi.[7]