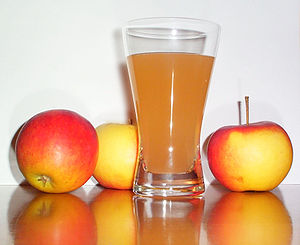 Apple juice
Not to be confused with cider.

Apple juice is the juice from apples. It does not have alcohol, and it tastes sweet from the natural fruit sugars. Many companies making apple juice like to say that they do not add more sugar into the drink, and there is only natural sugar.

The apple tree came from the same era as Elizabethan in the late 1500s and early 1600s (Pyrus malus), and is native to Britain. Even in the Old Saxon papers, apples and cider are mentioned a lot.[1] The fruit is thought to have come in the Caucasus, a place with many mountains between the Black and Caspian Seas.[1]

The Lady apple, a kind of apple still grown today, is believed to be one of the oldest apple trees on record.

Apple juice is 88% water and 11% carbohydrates (including 9% sugars), with little amounts of protein or fat.

It is remarkable how closely the history of the apple tree is connected with that of man.
—

In both facts and stories, the apple appears to be very healthy. There are two types of apple juice. One is the clear apple juice, and the other is the cloudy apple juice. Pectin and starch are taken out during the production process to produce clear apple juice. Cloudy apple juice is cloudy because of evenly-distributed small pulp suspensions in the juice concentrate.[1] Also, in apple juice, the vitamin C, and other vitamins are contained inside, as well as mineral nutrients such as boron which helps build strong bones. Research from the University of Massachusetts Lowell shows that apple juice also increases acetylcholine in the brain, which gets you increased memory.

Apples can also be a main source of fiber, and is a powerful cleanser and an important necessity for the health of your body.[2]

The compounds in apple juice called phytonutrients delay the break down of LDL or cholesterol. In history, the phrase from Benjamin Franklin "an apple a day keeps the doctor away" is very famous. New research is proving this phrase to be a fact. Researchers at UC Davis School of Medicine have recently found out that drinking apple juice seems to slow down the process that may lead to heart disease.

Researchers at the University of Groningen in the Netherlands had studied and found that smokers who ate many fruits and vegetables, especially apples, had reduced their risk of getting the common diseases smokers would get. The risk was reduced by 50%.[2]

For older people, drinking fruit juices should begin with apples, especially if they are suffering from arthritis and rheumatism. This is because apples carry a substantial amount of potassium. Because of this, eating apples or apple juice has been known to help. Drinking apple juice also removes some toxins from the liver and kidneys and is low in calories. Over time, this can reduce the chances of having liver or kidney disease.[2]

Apple juice can be used to make cider and calvados. Some types of cider and all types of Calvados contain alcohol.

Addressed as one of the most popular fruits in the world, the apple is cultivated in around 7,500 different kinds in shape, color, texture, firmness, crispness, acidity, juiciness, sweetness, nutrition, and harvesting time.[1]

Fresh apple juice needs refrigeration. Closed bottles of canned apple juice can be kept in a dark, cool place, such as a pantry or cupboard. It slows down the spoiling of the product. The way it looks, feels, or tastes could change over time.

Once the juice container is opened. Or if it was not closed and shipped without needing freezing by the producer, it must be closed again tightly and frozen to avoid contamination from microorganisms such as bacteria.