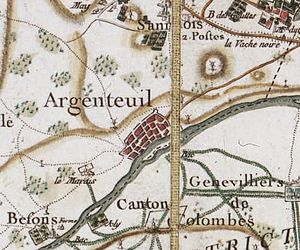 Argenteuil is the second most populated town in the suburbs of Paris (after Boulogne-Billancourt) and the most populated commune in the Val-d'Oise department; however it is not the prefecture. Its population is about 94,000 (1999).

This short article about a place or feature in France can be made longer.

Help Improve This Page: Please contact us to become an approved KidzSearch editor and provide your credentials. Provide feedback on this article in our Argenteuil Forum