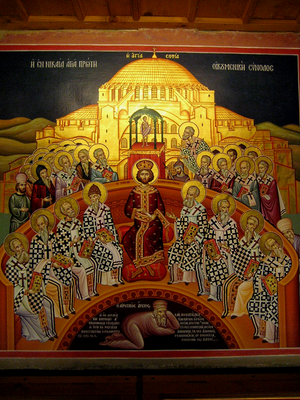 An icon from the time, showing the First Council of Nicea, which condemned Arius' position. Artius is shown at the bottom of the image.

Arius (born around 260, died 336 in Constantinople) was an early Christian thinker. His ideas were the basis of Arianism. Arius grew up in Alexandria, but was probably from Libya. Arius developed a few ideas:

At the First Council of Nicea, people did not agree with Arius; the official document says that God Father and God the Son were of the same essence, and therefore the same being.