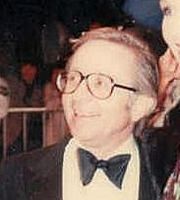 Arthur Stanton Eric "Arte" Johnson (January 20, 1929 – July 3, 2019) was an American comedian and television, movie, and voice actor. His career lasted for 50 years. His career started in 1954 up until his retirement in 2005. Johnson was a regular cast in Rowan & Martin's Laugh-In. His well-known "character" was that of a German soldier with his famous the catchphrase: "Verrrry interesting, but...['stupid', 'not very funny', and other versions]". He won a Saturn Award.

Johnson was born in Benton Harbor, Michigan.[1] He was educated at the University of Illinois. He was married to Gisela Johnson from 1968 until his death. Johnson died on July 3, 2019 in Los Angeles from bladder and prostate cancer at the age of 90.[2]