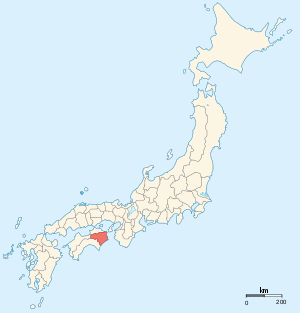 A map of Japanese provinces (1868) with Awa Province (Tokushima) highlighted

Awa Province (阿波国, Awa-no kuni?)[1] was an old province of Japan in the area of Tokushima Prefecture on the island of Shikoku.[2] It was sometimes called Ashū (阿州?).

Awa had borders with Tosa, Sanuki, and Iyo Provinces.

Off the coast of Awa Province, woodblock print by Hiroshige, 1856

In the Meiji period, the provinces of Japan were converted into prefectures. The maps of Japan and Awa Province were reformed in the 1870s.[3]

Ōasahiko jinja was the chief Shinto shrine (ichinomiya) of Awa. [4]