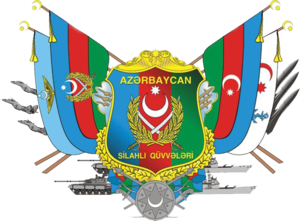 The Emblem of the Azerbaijani Armed Forces

The Azerbaijani Armed Forces (Azerbaijani: Azərbaycan Yaraqly Qüvvələri) is the military of the Republic of Azerbaijan.

The Commander-in-Chief of the military is the President of Azerbaijan, currently Ilham Aliyev. The Ministry of Defense is in charge of political leadership. It is currently headed by Safar Abiyev. Military command is in the hands of the General Staff, headed by the Chief of Staff, who is Colonel-General Najmaddin Sadigov.

Since the fall of the Soviet Union, Azerbaijan has been trying to further develop its armed forces into a professional, well trained, and mobile military. Based on 2007 statistics the country has about 66,940 troops, and a paramilitary force of 15,000 troops. There are 300,000 former service personnel who have had military service in the last fifteen years.[1]