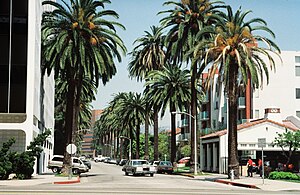 This is a street in Beverly Hills

The largest homes in Los Angeles and in the United States are in Beverly Hills. These homes can be really large and fancy, to more common and modern homes, and then to smaller homes with less than 3,000 square feet, which is still quite a large area.

In 2007, Coldwell Banker lists Beverly Hills as having the most expensive houses. The houses in Beverly Hills cost a lot. They can cost over 2 million dollars.[source?] However the houses are large, spacious, and fancy and that is why a lot of celebrities live there, and also because it is close to Hollywood.