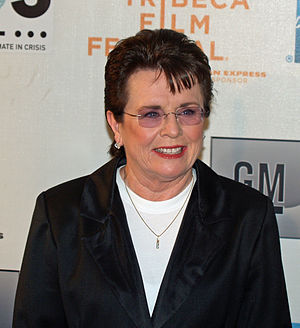 Billie Jean King (born Billie Jean Moffitt on November 22, 1943 in Long Beach, California) is a retired tennis player. She is considered one of the greatest female tennis players. She won many championships during her career which started in 1959 and ended in 1983. She was known for speaking out against sexism in sports and society. She started the Women's Tennis Association, World TeamTennis, and the Women's Sports Foundation. Her most famous match was in 1973 called "The Battle of the Sexes" between Bobby Riggs, who had been a champion in the 1930s and 1940s. She loved playing tennis but had to stop due to an injury.[1]