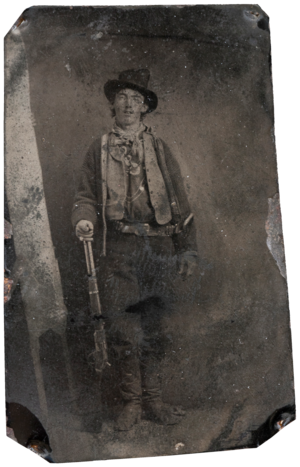 This ferrotype photograph, the only existing photo of Billy the Kid, is a mirror image of the outlaw. Zoom

William H. Bonney (1859-1881), better known as Billy the Kid was an American gunman who took part in the Lincoln County War. Legends say that Billy killed 21 men, but history tells us that he murdered at least four men.[1] He was shot dead in New Mexico by his old gangmembers. Billy the kid or William H. Bonney as he was called was born November 23, 1859. He died July 14, 1881. He was the 19th-centuary American gunman. He participated in the Lincoln Country War and according to the legend he killed 21 men, but generally it is believed that he killed 4-9 men. The first murder was in 1877. He lost his mother; Catherine McCarty on September 16, 1874.