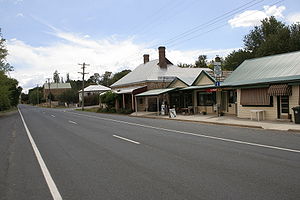 Binda is a village in the Southern Tablelands region of New South Wales, Australia in Upper Lachlan Shire.

It is about 261 km south-west of Sydney and 19 km north of Crookwell.[1] Other near-by towns or locations are:

The word Binda is thought to be from the Gandangara Aboriginal word for deep water.

The first Europeans in the Binda area were the explorers James Meehan and John Oxley in 1820. People began living in the area in the 1840's. Police were based at Binda in 1840 to protect local farmers from bushrangers.[1] The town was begun in 1851. Blocks of land in the town were made ready for sale in 1852. It was the first town in the area to have a school, post office, police station and a courthouse.[3] At Funny Hill, a sheep farm, a racing track for horses was made and the Binda Picnic Races began in 1848.[1]

On Boxing Day, December 26, 1864, the bushrangers Ben Hall, John Gilbert and John Dunn rode into the town with 3 local girls. They robbed a shop owned by Edward Morriss. They locked all the local people into the Flag Hotel. They made everyone dance to celebrate Boxing Day. Morriss got out of the hotel at 2.00 a.m. and set off to tell the police. Hall set fire to Morriss's shop and burned it down.[1]