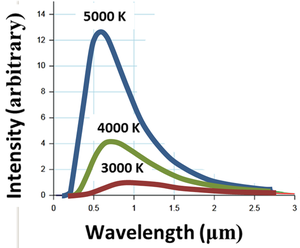 The curve of blackbody radiation for highest (blue), intermediate, and less-high temperatures (red)

Blackbody radiation is radiation produced by heated objects, particularly from a blackbody. A blackbody is an object that absorbs all radiation (visible light, infrared light, ultraviolet light, etc.) that falls on it. This also means that it will also radiate at all frequencies that heat energy produces in it.

Everything glows, depending on its temperature. Hotter things glow more in shorter wavelengths. Cooler things don't glow so much, especially in short wavelengths. Partly the radiation wavelength depends on what the material is, and partly it doesn't. The part that only depends on temperature, and not on composition, is called blackbody radiation.

This part of the story of radiation was first explained by James Clerk Maxwell via wave theory but the predicted and actual intensity vs. frequency curves did not go together right. At higher frequencies classical physics predicted that more and more energy would be radiated from the body until the energy became infinite. This broke the first law of thermodynamics which is a fundamental part of all physics. This was called the ultraviolet catastrophe.

When it was realised that classical physics did not work for blackbody radiation, the German physicist Max Planck explained their relationship by saying that there are individual things (he did not try to guess what kind of things) that vibrate, each at its frequency. Each wave of each frequency has its special energy level. A single x-ray is very high photon energy and can go right through the human body.

A single wave or photon of infrared light is very low energy, cannot go through the human body, and can only warm it. Planck's good thinking was to realize that to get a single wave at the x-ray frequency, it was necessary to have a big enough package of energy (or "quantum") to make such a strong wave. So if a blackbody took in a single wave at the x-ray frequency, then it could give off an x-ray at some later time. But if the blackbody only took in infra-red light it would not matter how much of it was absorbed.

It could only give off infrared light and could not give off even ordinary red light, much less any higher energy light such as ultraviolet light or x-ray radiation. Planck said that the total energy given off by a blackbody at any particular frequency is equal to the number of the "vibrating things" (see above), n, that was vibrating at a given frequency, f times a special constant, h, that turns frequency units into energy units. The equation is:

The constant he made, h, is called the Planck constant.

The idea that a unit of light at a given frequency always has the same energy, the idea that there is a quantum of energy for each unit of light at a given frequency, became the doorway into quantum mechanics, so the idea of a blackbody is something that is basic to modern physics. It shows up in discussions of a wide variety of physics topics having to do with energies and frequencies.