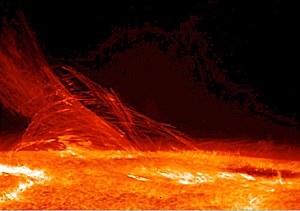 Heat from the sun.

Heat is the sum of the kinetic energy of atoms or molecules. In thermodynamics, heat means energy which is moved between two things, when one of them is has a higher temperature than the other thing.

Heat is a form of energy and not a physical substance. Heat has no mass.

Heat can move from one place to another in different ways:

Specific heat capacities can be looked up in a table, like this one.

Unless some work is done, heat moves only from hot things to cold things.

Heat can be measured. That is, the amount of heat given out or taken in can be given a value. One of the units of measurement for heat is the joule.

Heat is usually measured with a calorimeter, where the energy in a material is allowed to flow into nearby water, which has a known specific heat capacity. The temperature of the water is then measured before and after, and heat can be found using a formula.

This short article about physics can be made longer.

Help Improve This Page: Please contact us to become an approved KidzSearch editor and provide your credentials. Provide feedback on this article in our Heat Forum