Max Karl Ernst Ludwig Planck (April 23, 1858 in Kiel – October 4, 1947 in Göttingen) was a physicist from Germany. He discovered quantum mechanics. He won the Nobel Prize in physics.

Planck came from an old fashioned, intelligent family. His great-grandfather and grandfather were both theology professors in Göttingen; his father was a law professor in Kiel and Munich; and his paternal uncle was a judge. 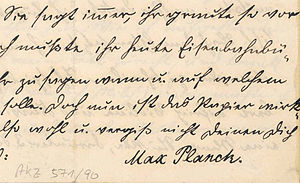 Planck was born in Kiel, Holstein, to Johann Julius Wilhelm Planck and his second wife, Emma Patzig. He was baptised with the name of Karl Ernst Ludwig Marx Planck; of his given names, Marx (a now not used variant of Markus or maybe simply an error for Max, which is actually short for Maximilian) was indicated as the primary name.[1] However, by the age of ten he signed with the name Max and used this for the rest of his life.[2]

He was the sixth child in the family, although two of his brothers and sisters were from his father's first marriage. Among his earliest memories was the marching of Prussian and Austrian troops into Kiel during the Danish-Prussian war of 1864. In 1867 the family moved to Munich, and Planck enrolled in the Maximilians gymnasium school, where he came under the tutelage of Hermann Müller, a mathematician who took an interest in the youth, and taught him astronomy and mechanics as well as mathematics. It was from Müller that Planck first learned the principle of conservation of energy. Planck graduated early, at age 17.[3] This is how Planck first came in contact with the field of physics.