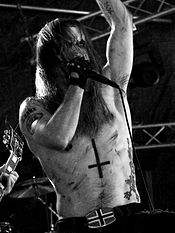 The Cross of St. Peter is a common image in black metal.

Black metal is an extreme style of Heavy metal that started in the early 1980s. Lyrics are often for religions such as Satanism. Various black metal bands have relations to satanism in their lyrics and even in outlook. Lyrics may also have subjects such as Paganism. The majority of black metal vocalists are male, although there are a few notable exceptions – for example Cadaveria, Astarte and Lucifugum.

Black metal is divided into two waves. The first wave began in the early 1980s by bands such as Venom, Bathory, Hellhammer, Celtic Frost and Mercyful Fate. Venom's first albums, Welcome to Hell and Black Metal are usually said to be the first black metal records. The second wave is the most popular wave of black metal and it started in the early 1990s. It started from Norway and includes bands such as Darkthrone, Enslaved, Burzum, Satyricon, Mayhem, Gorgoroth, Immortal, and Emperor.