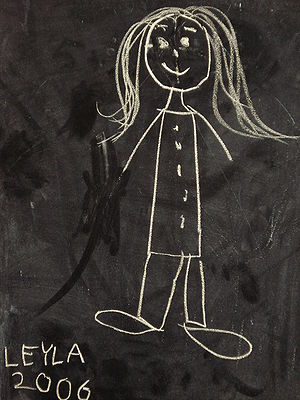 A blackboard, also called a chalkboard, is a surface on which chalk is visible.[1] It is used as a surface to write on. It is usually made up of wood or fiber. It is painted black to reflect the white chalks. The high-grade blackboards are made of porcelain enamelled steel.

Blackboards are often used to help in teaching in school. Blackboards are not used as much now but can be seen in some schools still. The chalk dust got everywhere, and some people are allergic to chalk dust. Now people use whiteboards: they can take modern felt-tip colour markers.

Schoolteachers use the chalkboard to display things at large. It also makes the learning cooperative between teachers and student. Chalkboards can be black or dark green, in which case they may be called blackboards and greenboards.