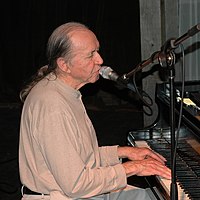 Bob Dorough (December 12, 1923 – April 23, 2018) was an American bebop and cool jazz pianist, singer-songwriter, composer, arranger and producer.[1][2] He was born in Cherry Hill, Arkansas and was raised in Texas.

He was best known as composer and performer of songs from Schoolhouse Rock!, a series of TV cartoons that appeared on Saturday mornings in the 1970s and 1980s. He worked with Miles Davis and Blossom Dearie, and his adventurous style influenced Mose Allison.