Bonifacio (Corsican: Bunifaziu) is a town and commune near the southern tip of the island of Corsica, in the département of Corse-du-Sud, France. Its inhabitants are called Bonifaciens and the city was founded as a fortress and named after Boniface II of Tuscany in 828. Bonifacio is split into two sections. The vieille ville (old town), or la Haute Ville (the Upper city).

Bonifacio is located directly on the Mediterranean Sea, separated from Sardinia by the Strait of Bonifacio. The commune includes the Lavezzi Islands. 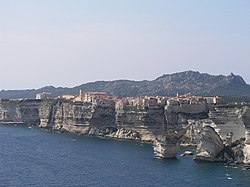