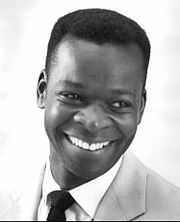 Brock Peters (George Fisher, July 2, 1927 – August 23, 2005) was an American movie, television, stage, and voice actor. He was known for his roles as Fleet Admiral Cartwright in two Star Trek movies and as the voice of Lucius Fox in Batman: The Animated Series.