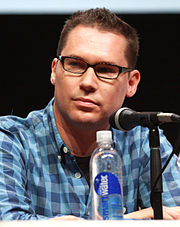 Bryan Jay Singer (born September 17, 1965) is an American movie director, producer and screenwriter. Singer is known for his works in The Usual Suspects, the X-Men movies and Superman Returns. He has won an Saturn Award.

Singer was born on September 17, 1965 in New York City, New York.[1] He was adopted and raised in West Windsor Township, New Jersey. He studied at West Windsor-Plainsboro High School South, at School of Visual Arts, and at the USC School of Cinematic Arts in Los Angeles.[2]

This short article about a person from the United States can be made longer. You can help Wikipedia by adding to it.
[[Category:Screenwriters from